As all of you know, our board makes many decisions each year and deciding on our award recipients is one of the toughest.  This year was no different as the list of nominees was absolutely stellar.  Each of the nominees has had a very positive influence on their teams and deserves our full recognition and appreciation. 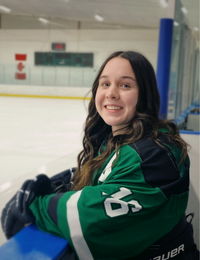 Teagan's relentless enthusiasm is a great support for her teammates and coaches alike. She lifts the spirits of the dressing room and is a driving force on the ice always leading by example.  Teagan truly shows every day that she deserves the letter on her jersey.

This year Teagan experienced a disappointing injury and lost half of the regular season's games.  She continued to come to every practice to help out the coaches and encourage her teammates.  She continued to make a great difference with a clipboard in her hand instead of a hockey stick.

In the dressing room Teagan explicitly recognized the difficulty for first year players given the three year gap and went out of her way to make sure the dressing room was welcoming to everyone.  Outside of the team, Teagan is also on the ice regularly teaching skating to the upcoming crop of hockey players.  She is an inspiration and role model to these young players!

In summary, Teagan inspires today's players on her team, and the future hockey players coming up.  It is not an exaggeration to say that her “give everything you have” attitude has inspired her coaches as well.

Teagan was also nominated by the Comets for the Evan Thomas Memorial SMHA Sportsperson of the Year Award & Scholarship - presented by Airline Hotels. 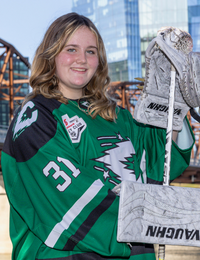 Jessa was a goalie on the Comet Crusaders and probably one of the biggest reasons why the team had such a great year.

Jessa’s positive attitude, and vibrant personality brought everyone together in the room. No matter how shy or quiet any of the girls were they could not help but laugh and be friends with Jessa. Jessa is always positive, upbeat and cheering her team on from the goal crease no matter the score. The team took on her best personality trait of working hard and having fun!

Jessa and the group of second years on the team made this one of the most fun and easy teams the coaches had experienced in years. The girls were are all responsible and courteous to each other.  At any team event, all girls attended as a team, having fun and cheering each other on. Jessa was a big part of this with her larger than life personality. Everyone just becomes her friend.

Winner of Comets JR Coach of the Year – Garret Soparlo 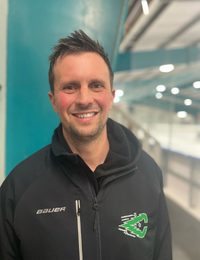 Garret’s focus, drive and determination to facilitate the girls success was a key component to his teams overall success this year.

Coach Garett exhibited an extreme level of team dedication by preparing long before practices took place. This became evident during his practices where he routinely structured them around areas of fair game play. His attention to detail by way of skill development was noticed by everyone. He made a key component of his teachings to have fun while learning key aspects of the game. This was evident when you could hear all the girls laughing and see their smiling faces during practices and games.

Garret routinely held “team building” events to allow the girls the opportunity to get to know each other. These events included: dry land training, water sliding, tobogganing, hosting the team for Gingerbread house making and collection of Christmas gifts for the Adelle House for Comets in the Community.

The leadership qualities that Coach Garett routinely displayed allowed him to personally develop a rapport with each player leading to a positive level of respect on and off the ice. Coach Garett had the unique ability to identify when a player was struggling and then personally worked with them in games and practices to build their confidence. After every game, Coach Garret will go up to each girl individually in the dressing room and tell them something that they did well to help the team.

Garret did not focus on winning or losing rather implementing unity, respect, and teamwork that lead to an increased ability to personally develop new skills.

Thank you and Congratulations Garret!

Winner of Comets SR Coach of the Year – Stephanie Ferguson 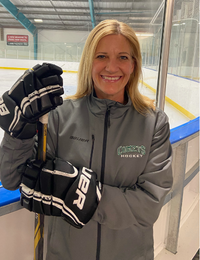 Stephanie was a Head Coach of a U11 team and an Assistant Coach on a U15 team. It is not her coaching on multiple teams that made her a good candidate for Coach of the Year, but the impact she makes on her players’ lives.

In a time when it is being encouraged for females to take a more active role in coaching, Steph has stepped up to lead the way. She demonstrated a positive attitude and lead by example.  Steph took on the responsibility of mentoring an upcoming female coach this year on her U15 team.  Using her experiences coaching other teams and playing Huskie Women’s Hockey, Steph was able to connect with her and pass on valuable knowledge to a future female Comets coach!

The leadership group of the U15 team (captain and assistants) affectionately call her Auntie Steph.  Her impact on the bench was noticeable when she was giving positive feedback and the girls’ faces lit up. Coach Steph didn’t only develop strong relationships with her U15 team.  Her positive approach was also obvious in her coaching style with her U11 team.  A sign of a great coach is that they not just make their players better at their sport, but inspire them to be better human beings. Coach Steph put this into action with her “athlete first” approach and in turn inspired her athletes to be better both on and off the ice.

The positive impact that Stephanie has had on so many of our Comet Girls, coaches and families this year alone is remarkable.

Stephanie was also nominated by the Comets for the Al Anderson’s Source for Sports SMHA Coach of the Year and was awarded that prize as well.

Winner of the Comets Volunteer of the Year Award – Jody Lintott 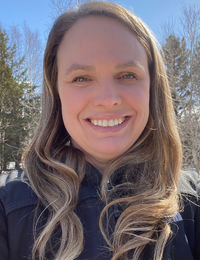 Jody was Manager of the U7 Comet Flames.  Her dedication and organization this year went above and beyond.  Jody devoted countless hours to ensure that this young team had the best first hockey experience ever!
The year started with Jody making up a questionnaire about the girls for each family so that coaches could get to know them.  She then went on to organize:

Jody did all the extra work so that the coaches could just focus on running the team on the ice!  Doing everything she did created healthy and positive relationships with the girls, coaches and their families and an unforgettable experience! 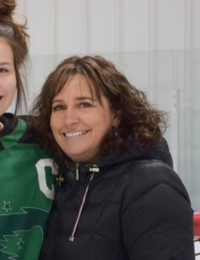 We believe the Executive of the Year is a member of the executive that not only excels in performance of their regular duties but also goes above and beyond what is required of them. Dinalle fits this description perfectly. She is our U18 coordinator and is a big reason why our evaluations go smoothly. She not only looks after the U18 division but is constantly supporting other members of our executive as well.

Perhaps the most important reason why Dinalle deserves this award is how she’s taken the lead on our Comets in the Female Community initiative. For 2 years now she has sought out and organized special Christmas hampers for families from Adele House and CUMFI (Central Urban Métis Federation Inc. ) Adele house Is a shelter for women who’ve had to escape domestic abuse and CUMFI is for young Mom’s living below the poverty line in the inner city.

The leadership Dinalle has taken on far exceeds anything that is expected of a coordinator. But most importantly her leadership and insight have made such positive impacts on young women and children in our community.

With Dinalle’s direction, several of our Comet teams have been able to participate in giving back to our community and make a positive impact.

It should be noted that Dinalle gives of herself without having a child playing Comets. She is still giving back even though her daughter is 2 years graduated.