As all of you know, our board makes many decisions each year and deciding on our award recipients is one of the toughest.  This year was no different from past years where the list of nominees was absolutely stellar.  Each of the nominees has had a very positive influence on their teams and deserves our full recognition and appreciation. 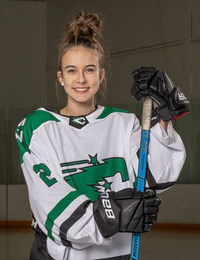 Tyrell is a first year midget player and is considered by her coaches as a “consummate team player”.  She attends all games and practices with a smile on her face and a great work ethic.  Being a younger player on her team, she is not the most vocal of leaders but leads by example with her play and work ethic on and off the ice.  Tyrell always shows respect for her opponents, teammates and officials.

Tyrell exemplifies the true meaning of Sportsperson, by continually “giving back” to our zone.  Not only does Tyrell play on one of our Midget A teams, at the same time she in an Assistant Coach on one of our Peewee C teams and is quite often seen helping with her sisters Pee Wee B team.  In the midst of playing hockey full time, coaching and volunteering in our zone, Tyrell maintains a 90% average in Grade 10 and also plays school sports.

Tyrell was also nominated by the Comets for the Evan Thomas Memorial SMHA Sportsperson of the Year Award & Scholarship - presented by Airline Hotels. Jemma is in her first year initiation.  Her coach stated that she is not only the most improved player on their team, but personifies all the ideal traits of an excellent player and teammate.  Jemma listens, works hard and is well liked by everyone. She is a girl that loves hockey and is a kid any coach would want on their team.

Winner of Comets Coach of the Year – Corey Young Corey has a tremendous love for the game of hockey and has dedicated 23 years of coaching to the families of the Saskatoon Comets. Between his three daughters, it was a grand total of 34 teams, 21 as head coach and 13 as an assistant. Some of which had gone through to become city and provincial champs. Through all those years he devoted many hours to the game but also to developing practice plans to ensure it was a fun environment for all skill levels and that each girl learned regardless of their ability.

Corey has been a mentor to other coaches and has encouraged them to increase their skills and always worked on his own coaching abilities to make sure they have improved each year.  He has contributed countless hours of his own time including the use of his professional office for off ice training and development sessions and uses his own professional skills to make sure that players are prepared mentally and physically for games.  Corey has always shown great respect for officials, other coaches and players.

Corey was also nominated by the Comets for the Al Anderson’s Source for Sports SMHA Coach of the Year.

Winner of Comets Volunteer of the Year – Lisa Maier 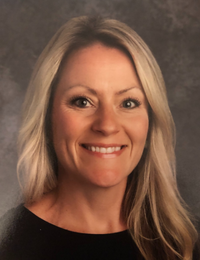 Lisa currently manages 2 of our Comets hockey teams as well as being a full time teacher.  Lisa has been a team manager for the past 7 years. Lisa has exceptional organizational skills and her ability to multitask is a true skill.  Lisa is a truly selfless person who is genuinely concerned about others wellbeing. A priority for Lisa is to ensure an inclusive atmosphere for all of our young girls.  She helps to ensure that all parents and athletes feel like they are part of the team. Lisa always has an encouraging word for players and coaches and is the most positive fan in the stands.

Sarah has been a member of the Comets board for the past 4 years.  Sarah has played an integral part of our board as Bantam Coordinator and handles her division with the upmost admiration.  Along with playing an integral part on our Comets Board, Sarah also volunteers as team Manager for both her daughters’ teams. Sarah is extremely organized, caring and well respected.